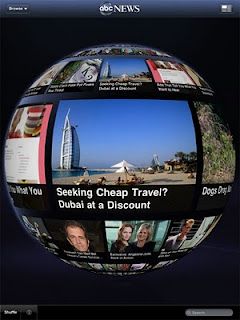 The ABC News sales organization under the influence of Straighttalk's Senior Research Associate extended me an extremely kind invitation to their 2010 Newsmaker Luncheon Friday in New York City.

What an exciting and memorable day! The invitees included ABC sales staff, reporters, journalists (broadcast and digital) (including the “Talent”), advertisers, and the important media buyers. There were a little over two hundred persons in attendance. This outstanding event was held at the famous New York Athletic Club.

The ABC sales team knows how to put on a great show. Reception before a prime rib lunch with cocktails, beer (two open bars) and world class munchies with butler service included fresh shrimp and rack of lamb. As a Foodie I shouldn't forget to mention a lox and eggs breakfast at the “Stage Delicatessen” (in the heart of the Theater District), my Dad's all time favorite deli.

My research director has friends in high places as my luncheon seatmate was Christiane Amanpour, the recently coronated host of ABC's Sunday Morning, “This Week”. Ever the world class reporter Ms. Amanpour asked where I was from and wondered what my connection was to ABC. When she heard I was from South Dakota and, she immediately told me of her interest in the Female Faceoff in our U S House race. She said that she had considered doing a feature on the race on several levels but the story it did not materialize.

On learning of my political involvement (particularly on the GOP side), she intently (though courteously and with I thought a tad of indulgence to my unwashed views) pursued a line of questioning of how the Republicans, specifically, were going to deliver on their promises, to cut spending, cut taxes, decrease the deficit, balance the budget, conduct two wars, create jobs, and increase economic growth.

Sidebar – Her hypothesis was similar to one I heard on election night from CBS commentator, Jeff Greenfield who described the GOP wish list as a Hot Fudge Sundae Diet. Since I had been thinking about Greenfield's metaphor, I was somewhat prepared for my distinguished luncheon-mate's question.

We had a lively exchange. I thought I answered her questions adequately; the featured guest on “This Week” tomorrow will be Kentucky Senator elect, Rand Paul. I expect Dr. Paul will get the Hot Fudge Sundae Diet question with both barrels.

The topic of conversation was the mid term elections, what happened, what it means, and where do we go forward from here.

Stephanopoulos said that it is important to understand the “magnitude” of the change. He reminded the audience that he was working in the White House during the 1994 change election. He said that in '94 the White House / Democrats were blindsided by the change in power. In contrast this year those in power saw it coming but either did not understand or under estimated the magnitude.

Stephanopoulos said The President is at least a “little” in denial. The effervescent George continued the President believes in his programs, but he seemingly does not want to drill down and figure out what caused the change. Stephanopoulos described the GOP win as a tidal wave that rolled across Interstate 80 changing many Congressional seats from blue to red. The GOP made significant pickups in Pennsylvania, Ohio, and Illinois. I liked the Highway 80 metaphor.

At that point in the presentation, there began a discussion about whether the two parties work could work together and effect compromise. The question came up as to the future of dethroned House Speaker and chief GOP villain, Nancy Pelosi. About 20 words into the subject, Senior Political Correspondent, Jonathan Karl interrupted with the announcement he had just received a text that the Speaker had announced she would indeed seek the Minority Leader post.

Sidebar – I wonder what Stenny Hoyer thinks of that? (Where do you get a name like Stenny?) Personally I thought Madame Speaker was going to resign from Congress within the next couple of weeks. Wrong about that. I guess she just loves the life and cannot let go.

Karl continued that the Liberals, pretty much those Democrats that remain want her to stay and they see her as the defender of their belief in Obamacare and the $800 Billion stimulus that has failed at meaningful job creation. At that juncture of the conversation, The Grande Dame of ABC News, Cokie Roberts interjected that the Republicans were in no mood for compromise anymore than the remaining Democrats. She explained that moderate and even conservative Republicans had lost primary challenges and while the Dems had tilted even further left, the GOP has shifted further right.

Sidebar – At my Research Associate's insistence, at the earlier reception we introduced ourselves to Cokie Roberts. I have always considered her the whole package -very smart, well spoken, and attractive. Mrs, Roberts who is the daughter of Hale and Lindy Boggs, Louisiana politicians (both were Democrat U S Representatives, her Father was the House Majority Leader and Mother also a U S Ambassador) has equanimity and the ability to ask probing questions to get information not score points. It was a thrill to very briefly seek and receive her thoughts on job creation, American competitiveness, and education.

Political Potpourri
Many other topics were covered in the one hour presentation. A few of the highlights –

The challenge to the health care law would work itself through the Court System ultimately reaching the Supreme Court in two or three years. It was questioned whether Justice Kagan would recuse herself from the deliberations and decisions as she might be conflicted having worked on the health care issue when she worked on domestic policy in the Obama White House.

The Wars in Iraq and Afghanistan were not issues in the election.

The Tea Party Movement – What are there positions on the wars, free trade, terrorism, immigration? These are important issues. Do these undefined positions have the possibility to fracture the Tea Party and their coalition if there is not agreement?

Hispanic voters – There are 50 million. To which Party are they loyal? Are they persuadable by either party? How does immigration play into building a coalition with them? Related factoid – Harry Reid received 64 percent of the Hispanic vote in his race while in the same election Nevadans elected a GOP Hispanic Governor Brian Sandoval. The other very interesting Hispanic / Immigration fact that was mentioned was in relation to Florida Senator elect Marco Rubio. (You may remember that Rubio expressed “some concerns” about the Arizona immigration law.)

U S law treats Cuban “immigrants” more as refugees. All a Cuban has to do is put a foot on U S soil and they are admitted legally into the Country. This is distinctly and far different than Mexicans who just arriving in the US if they get caught gets them a one way ticket back to where they came from. Many are suggesting that Rubio is the new face of Hispanic Republicans. Will the Immigration issue trip him up?

Al Qaeda – There seems to be a change in tactics. Rather than mind blowing events like the World Trade Centers or the Pentagon, Al Q. is looking to smaller events like the two recent bombing attempts on aircraft, the Times Square attempt, or last Christmas’ underwear bombing attempt. It seems now Al Qaeda just wants to get on the scoreboard, they don’t need to be Headline News thirty days in a row with a Peal Harbor type event.

Even mentioned was how Americans this year have embraced Flu vaccinations. Children and adults are getting them, a very distinct change from last year. (Pharmacies are now giving shots. Either it is profitable or a great lost leader to generate store traffic. I think that the free market promotion may be a factor.)

Facebook and Social Media – In 2008 the Obama campaign owned it. In 2010 the Elephant took over.

Sara Palin – There was a brief discussion as to the extent that she captured the Tea Party crowd. Her endorsed candidates won 62 percent of the time (though she also endorsed incumbents, GOP nominees as well as Tea Party supported challengers. Stephanopoulos ventured his opinion that she would continue to be at odds with the GOP Machine and that Karl Rove in particular would be the he said to her she said. He did not think she would be a candidate for the GOP nomination in 2012 but said he might be weakening ever so slightly on her running. Stephanopoulos did say she could be a factor in who does win the nomination however.

As it concerns the official program, ABC News’ pollster (I do not know his name and am unsure if he is in house or otherwise) gave his summary of 2010 which at a minimum set the stage for voter attitudes. His thought was the most cognizant of the day. He said, “It’s the Economy.” He pointed out the high rate of unemployment, the average length of those on unemployment (the highest since the late 1940’s) and that three fourth of American households have not seen personal income growth in the past two years being the deep causes of voter discontent.

The pollster went on to say, what Americans most want is Security, Liberty, and Opportunity for Prosperity and they feel extremely unsure and threatened at the moment.

Thinking about the day, I saw an ABC News in transition. Gone were David Brinkley and Charlie Gibson. There was the venerable Diane Sawyer who had been a White House staffer for Richard Nixon (she was at times suspected to be “Deep Throat” during the Watergate investigation), whom I perceive is the transitional character to a younger generation of Stephanopoulos’, Karls, and Amanpours. Not only is the Talent turning over but so is the venue. Digital Baby!

ABC is delivering not just on television and radio but extensively on the Internet including their programs and video reports. If you have access, check out their IPad Ap.

As I reflect on sitting there thinking of change, I saw my daughter with her new leader, her other younger and bright colleagues, the wonderfully talented Catherine Sullivan, President of ABC News Sales. I thought about the changing of the guard not only at a communications and media powerhouse network but understanding in a very personal way that Change is inevitable (Yes I’m aging).

My Dad often told me, that the only thing that does not change is Change.
Posted by Joel Rosenthal at 7:55 PM