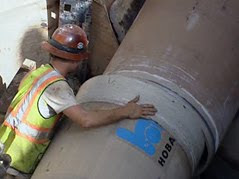 Sioux Falls’ sewer emergency commenced on August 4, quick action by the City’s Public Works Department and executive leadership by Mayor Huether ensued and little over five weeks later repairs are made. Good Job!
The sewage line collapse exacerbated by the severe summer rains caused an emergency and disaster was probably averted. Today in a news story titled “Sewer Repair tally: $1.4 million”, it was reported the total cost of the temporary by pass and permanent improvements and upgrade is $1.4 million dollars. The article also indicated that City officials “are hoping that the federal money will help cover the costs.
Money is tight in a City that has uncertain sales tax revenue in an uncertain economy and is operating on a slimmed down budget using significant budget holdbacks implemented by former Mayor Dave Munson.
While the sanitary sewer system was being repaired, a separate track was also being pursued by City officials. On August 31 the City requested from the Minnehaha County Commission a declaration of disaster that would allow the Governor to declare a disaster and trigger a request for FEMA funds to help pay the Sioux Falls’ repair bill.
Sure it is great for someone else to pay your bills but it should not be the Federal government’s responsibility to pay for what is solely a Sioux Falls problem.
$1.4 million while significant is something the City could have handled. The last I understood, there were almost $40 million in reserves.
Is it any wonder that our Federal Treasury is broke? A break in an old sewer line is Sioux Falls under lots of pressure from Mother Nature should not a Federal case. To have any hope of straightening out the fiscal mess in Washington we must get off Uncle Sam’s benevolent teat. More than a little self reliance is called for.
The Problem is ours, not Washington’s!
Endbar – Taking into account the bureaucratic costs, it cost a lot more that the $1.4 when the County, State, and Sugar Daddy get’s involved. And don’t forget whose money it really is, ditto not Washington’s!
Posted by Joel Rosenthal at 6:56 PM 1 comment:

Rosh Hashana Guide for the Perplexed
By: Yoram Ettinger
September 8, 2010

Based on Jewish Sages

1. Rosh Hashanah - unlike all other Jewish holidays - is a universal(stock-taking, renewal and hopeful) holiday. It is celebrated on the sixthday of The Creation, which produced the first human being, Adam. Rosh(Hashanah) means in Hebrew "beginning," "first," "head," "chief." The Hebrew letters of Rosh constitute the root of the Hebrew word for Genesis,"Bereshit", which is the first word in the Bible. Just like The Creation, soshould the New Year and our own actions, be a thoughtful - and not a hasty - process. Rosh Hashanah is celebrated at the beginning of the Hebrew month of Tishrei, which means beginning/Genesis in ancient Akkadian.

The Hebrew spelling of Tishrei is included in the spelling of Genesis. Rosh Hashanah is referred to as "Ha'rat Olam" (the pregnancy of the world), and its prayers highlight Motherhood, Optimism and the pregnancies of Sarah and Rachel, the Matriarchs, and Hanna, who gave birth to Isaac, Joseph & Benjamin and Samuel the Prophet respectively. Sarah (the root of the Hebrew word, Israel) and Hanna (the root of the Hebrew words Pardon, Amnesty and Merciful) were two of the seven Jewish Prophetesses: Sarah, Miriam, Hanna, Deborah, Huldah, Abigail, Esther. Hanna's prayer has become a role-model for God-heeded-prayers which are recited by the "non-privileged". Noah – who led the rebirth of humanity/world - also features in Rosh Hashanah prayers.

2. The transient/tenuous nature of human beings is highlighted by thecelebration of Rosh Hashanah (the beginning of a New Year) and the end ofthe previous year. Recognizing human fallibility, Rosh Hashana highlightshumility, soul-searching, responsibility, renewal/rebirth and the need forsystematic education.

3. The Shofar (ritual horn) is blown on Rosh Hashanah as a wake-up call tomend human behavior. Rosh Hashanah is also called "Yom Te'roo'ah" (the day of blowing the Shofar). Shofar is a derivative of the Hebrew word forEnhancement/Improvement (Shipur), which is constantly expected of humanbeings. It requires humility, symbolized by the Shofar, which is bent and isnot supposed to be decorated.

The Shofar is the epitome of Peace-Through-Strength: It is made from thehorn of a ram, which is a peaceful animal equipped with strong horns, inorder to fend off wild animals. The numerical value of the Hebrewword,"ram", is 41, equal to the value of "Mother."

While the blowing of the Shofar is a major virtue, listening to the Shofaris at least as pertinent a virtue. The Hebrew root of "listening" is Ozen,ear, which contains the balancing mechanism in our body. Ozen is also theroot for "Scale" and "Balance", which is the zodiac sign of the month ofTishrei. Both Rosh Hashanah and Yom Kippur (when people balance their good deeds vs. bad deeds) are observed during the month of Tishrei.

4. The three ways of blowing the Shofar express the inner constant values(Te'kiyah), the tenuous nature of human actions (She'va'rim) and thedetermined pursuit of faith-driven long-term vision (Troo'ah). The last,and very long, blow of the Shofar (Te'kiyah Gedolah) represents long-termsteadfastness capability in face of challenges and threats.

The three series of blowing the Shofar highlights the liberty ofhuman-beings under G-D's Kingdom (Malkhooyot), the centrality ofhistory/memory/roots (Zichronot) and enhancement (Shofarot).

The blows of the Shofar represent the three Patriarchs, the three parts ofthe Bible and the three types of human beings on judgment day (pious, eviland mediocre).

Rosh Hashanah services include 101 blows of the Shofar. It is the numericalvalue of the Hebrew spelling of Michael, a Guardian Angel, which was one ofthe names of Moses.

The pomegranate becomes ripe in time for Rosh Hashanah and contains -genetically - 613 seeds, which is the number of Jewish laws (of Moses). Itwas employed as an ornament of the Holy Arc, the Menorah (candelabrum) and the coat of the High Priest. It is employed as an ornament for the TorahScrolls. The first two letters of the Hebrew word for pomegranate, Rimon -which is known for its crown - mean sublime (Ram). The pomegranate (skin and seeds) is one of the healthiest fruit: high in iron, anti-oxidants,anti-cancer, decreases blood pressure, enhances the quality of blood and thecardiac and digestion systems. Rimon is a metaphor for a wise person:Wholesome like a pomegranate.

6. Commemoration Day ("Yom Hazikaron" in Hebrew) is one of the names of Rosh Hashanah. One can avoid - rather than repeat - past mistakes by learning from history. The more one remembers, the deeper are the roots and the greater is one's stability and one's capability to withstand storms ofpressure and temptation. The more stable/calculated/moral is the beginningof the year (Rosh Hashanah), the more constructive will the rest of theyear.

Rosh Hashanah commemorates:Faith in - and Awe of G-D;
Optimism in the face of daily adversity;
The first human-being, Adam, who was created on the sixth day of theCreation; The cycle of nature - seed planting season and the equality of day andnight;
The opening of the Ark of Noah following the Flood;
The almost-sacrifice of Isaac (thou shall not sacrifice human beings);
The three Patriarchs, Abraham, Isaac and Jacob were conceived/born duringthe month of Tishrei, which is called "The Month of the Strong Ones" -Nature and the Patriarchs; The release of Joseph from Egyptian jail;
The receipt of the Ten Commandment and the Torah;Deliverance from spiritual and physical slavery (which inspired theAbolitionist movement);
The Prophet Samuel (who inspired the early Pilgrims, US Founding Fathers and the rebellion against the British) was conceived in Tishrey;Reconstruction of the Second Temple and destruction of both Temples;
The ingathering of the Jews to the Land of Israel; The first of the Ten Days of Personal, Annual Self-Examination (similar to afull service of one's car).

7. A Hebrew word for atonement/repentance is Te'shuvah, which also meansspiritual and physical Return to core values and to the Land of Israel. OnRosh Hashanah one is expected to plan a "spiritual/behavioral budget" forthe entire year. The prerequisite for a wholesome "budget" is humility, apre-condition for an effective "stock taking." The three Hebrew words,Teshuvah (Repentance/Atonement), Shivah (Spiritual and Physical Return) and Shabbat (Creation concluded) emerge from the same Hebrew root. Theyconstitute a triangular (personal, national and spiritual) foundation, whosestrength depends on the depth of Education and Commemoration. According to King Solomon, "The triangular cord cannot be broken."

May the New Year (5771 according to the Jewish calendar) be top heavy onTruth, Realism and Endurance and low on misrepresentations, delusion andvacillation.

Posted by Joel Rosenthal at 7:35 PM No comments: