How About Those Frogs 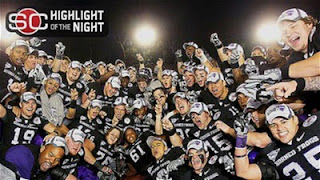 Among family a common refrain heard is “You can’t bring back the good old days but Pabst brought back the beer.”
The 2011 Rose Bowl game on New Years Day returned me to those days of yesteryear to my childhood over a half century ago.
Two years ago I posted on “the most exciting football game I ever saw” (Texas v. Texas Tech). Saturday’s Rose Bowl game (T C U v Wisconsin) was a great if not Classic football game with pretty evenly matched teams but more than exciting it was a blast to the past. In my Happy Days are Here Again post, I said:
“Growing up in the fifties my home town TCU Horned Frogs won 3 Southwest Conference Championships and were consistently ranked nationally despite being a private Church school.”
Thus on this New Years Day my heart was a little lighter thinking of things past and the Horned Frogs return to greatness. To College football fans the story of the non BCS Frogs who are undefeated this season and truly the Cinderella team is well known. I won’t drill into it.
Just suffice to say that the Fort Worth University has a grand tradition and despite the on going National Playoff BCS controversy and the demise of the once great Texas Football League, aka the Southwest Conference (covered in other postings, here, here, and here) WE’RE BACK!
To paraphrase, You can take the boy out of his hometown but you can’t take the hometown out of the boy.
Posted by Joel Rosenthal at 5:22 PM