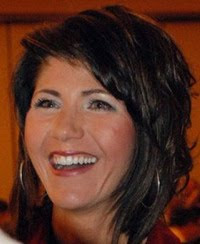 Kristi Noem needs to get on message!
Posted by Joel Rosenthal at 4:49 PM