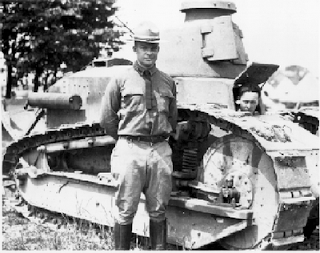 Today is the 91st anniversary of the commencement of the Transcontinental Motor Convoy. The convoy was the first convoy across the Continental United States. It departed Washington, D C on July 7, 1919 and arrived in San Francisco on September 6.
An endeavor of this kind was important because armies move on roads.

One of the prominent leaders of the convoy was Lieutenant Colonel Dwight Eisenhower. Eisenhower who graduated West Point in 1915 never deployed overseas during World War I. He stayed stateside developing the use of armored Tanks for warfare. Eisenhower was third in command of the new Tanker Corps. During the War Eisenhower spent some time training and developing tanker tactics at Gettysburg, Pennsylvania. For a training ground he used the hallowed ground of the location of Pickett’s Charge on the Gettysburg battlefield.

During the convoy due to the poor highways and the heavy nature of the tanks, trucks, and other military equipment, if any rain or otherwise wet roads were encountered the convoy stopped. During the 1930s Eisenhower studied the German Autobahn.

During his career Ike learned the importance of good roads.

In his book, “At Ease Stories I Tell to Friends”, Ike relates how he came to think about and push for the establishment of the Interstate Highway System. BTW, “At Ease” is a great read. From the book:

“The old convoy had started me thinking about good, two-lane highways, but Germany had made me see the wisdom of broader ribbons across the land.”

“This was one of the things that I felt deeply about, and I made a personal and absolute decision to see that the nation would benefit by it.”

Happenstance is a great thing about history. There is little doubt that without the Eisenhower Interstate Highway System our nation and our commerce would not be what it is today.

Given today’s current political environment, both the partisan gridlock in Congress and the bureaucracy’s inability to deal with large projects (think protecting borders, natural disasters, oil spills, that such a project could pass the Congress or be constructed in a fiscally responsible (large cost overruns) or timely way.
Posted by Joel Rosenthal at 5:25 PM