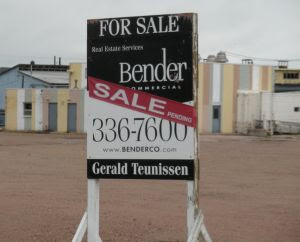 Saturday found me at another of Mayor Huether’s weekly listening meetings at the Whisk & Chop. This is the fourth I’ve attended. They are extremely informative and I have learned quite a bit about the operation of City government.

Yesterday’s forum featured Mike Cooper director of Planning and Building Services. As all the division heads have done, Cooper gave an informative presentation on his department, spoke to the current hot button issues, and took questions (hard and soft) about his responsibilities. All of the Division Directors have been very professional.

A few of the facts that Cooper reported that I found interesting were that in the first half of this year building permits were issued for 455 new housing units in Sioux Falls of which 234 were for single family homes and that 25% of the workers in Sioux Falls do not live here.

This morning’s “Argus Leader” reported on the meeting and led with the headline, “City Plans Zoning Code Revisions.” While there was a good deal of discussion about public notification about zoning changes and code enforcement, the news report missed the big news of the meeting.

While Cooper was talking about long range (emphasize long range) planning specifically to roads he mentioned that an overpass is contemplated that would connect Russell Street with Rice Street to make another Cross-town Boulevard similar to what is being developed on 57th Street. While this is long term and other to what I believe conceptual, this overpass might begin at North Main Avenue and connect where Weber meets Rice at the intersection of the Stockyards and Morrells, past the north end of Falls Park. (any interpretations or misinterpretations here are mine – not Mr. Coopers).

This prompted a question about the future of the Stockyards. The Stockyards represents a large (I think he said about 34 acres) site for development within the City – actually near downtown. Cooper answered (at the urging of Mayor Huether to let the cat out of the bag) that the site had recently been purchased by Peska Construction (presumably for development) and an announcement was forthcoming in a couple of weeks.

My guess given the fact that the site was a Stockyards and it’s across the street from perhaps the largest slaughterhouse and meat processing complex in the United States (certainly it’s one of, if not the last 19th Century old school multi story plants left), the zoning has to be the heaviest of Industrial zoning unless Stockyards have their own zoning classification.

Finally worth noting from the meeting, Mayor Huether said that he had a call from “Money” magazine within the last two weeks and that he was told Sioux Falls was again being considered to be named their best place to live in America. The Mayor was generous when talking about it and said any credit belonged to Dave Munson.

Along with Sanford research, an announcement by “Money” and Stockyards redevelopment Sioux Falls is moving forward.

Endbar – in the spirit of good things starting to happen, it was reported (yes in the “Argus Leader”) that several of the empty big box retail spaces in The Meadows have recently been leased. These good things are happening despite a languishing recovery in the national economy.
Posted by Joel Rosenthal at 6:04 PM